At the bottom of our land there is a kind of tree house, built by the previous owners. 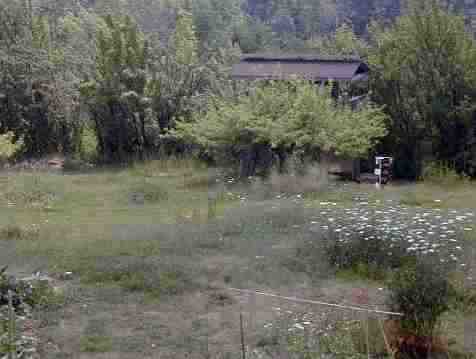 Underneath the house, which is raised on 4 vertical beams, there is a great space for a solar shower. 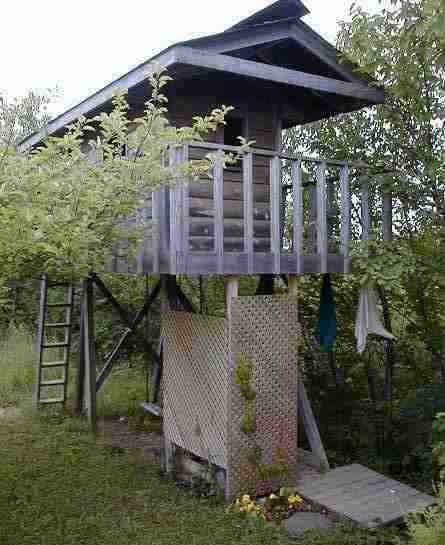 Initially we set it up with a small plastic sac designed for camp showers. This was placed on the roof of the treehouse which faces south and gets quite hot in the sun. The plastic tube was extended down from the roof to the shower area on the ground level.

The water sac only presented a relatively small surface area to the sun. The water only rose to a luke-warm temperature, and the sac held a small amount of water which ran out quite quickly. We tried building a reflector of silver foil around it to concentrate the heat, but it didn't do much and was blown around by the wind. Then we tried placing a metal sheet partially underneath the bag and partially exposed in the sun. The idea was to use the conductivity of the metal to move the heat underneath the bag of water. But with the small thickness of the sheet metal, it didn't conduct much heat. In a test, we set the sheet up half in the sun and half in shadow. The shadow half hardly warmed up at all. Presumably if we used a much thicker sheet ,made out of copper, it would act as a much better conductor of the heat. This would have been very expensive.

The challenge was clearly how to capture much more heat from the sun with a larger volume of water. This meant dramatically increasing the surface area of the water exposed to the heat of the sun.

It happens that the slope of the land is enough that the top of the roof of the treehouse is below the water level in our rainbarrel system. We already had a water line from the barrels running down the garden close to the treehouse. We extended this line to the treehouse and ran it up to the roof. There we layed out 150 feet of 1" flexible black plastic pipe in a spiral on the roof, fed by the waterline from the rainbarrels. A clear plastic pipe ran from the other end of the pipe down to the shower at ground level. 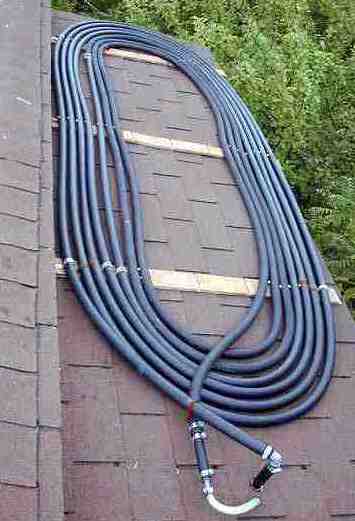 This new setup works extremely well. In fact, the water is so hot in the middle of the day that you can't stand under it for more than a few seconds. And because the water comes from the rainbarrels up at the house, the pressure is good and there is an almost endless supply of it. Of course the water cools down after all the water in the 150' of pipe is used up. But it doesn't cool that much, probably because there is enough latent heat in the pipe that it transmits quite a bit of heat to the water as it moves through the pipe, heating the water on the fly. Also the pipe is partially exposed to the sun on the way down from the house so there is some pre-heating of the water on its way to the treehouse.

To combat the excessive heat in the middle of the day, we found that we could point the showerhead up in the air, forcing the water to travel in an arc through the air, before touching the skin. This cools the droplets down noticeably. 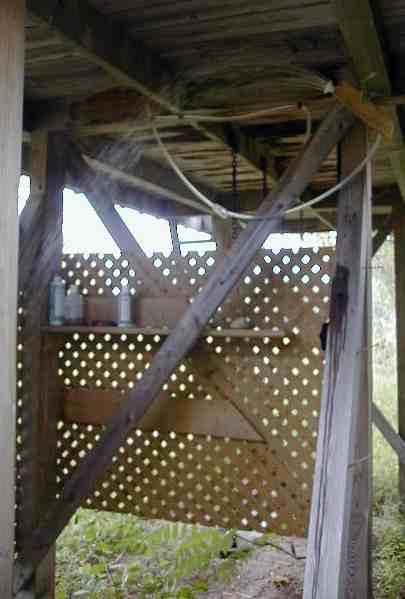 Since this setup above, I have refined the arrangement, adding a ball valve shutoff rather than the 'pincher' that came with the original solar shower bag. AND, because when it's hot it's REALLY hot, I've added a cold water tap. You can see in the picture below how the feed from the rainbarrels (black) goes up to the heater on the roof, and there is a 'T' junction that takes this cold water off first and mixes it with the hot water coming down. This was hard to control with the original ball valve I tried (large red handle), so I later replaced that with a conventional tap so you can turn it to add cold gradually (not shown). This setup makes the (very) hot water last longer as it gets mixed with cold, and then if it does start to run out, you can shut down the cold water to get the last of the hot stuff. 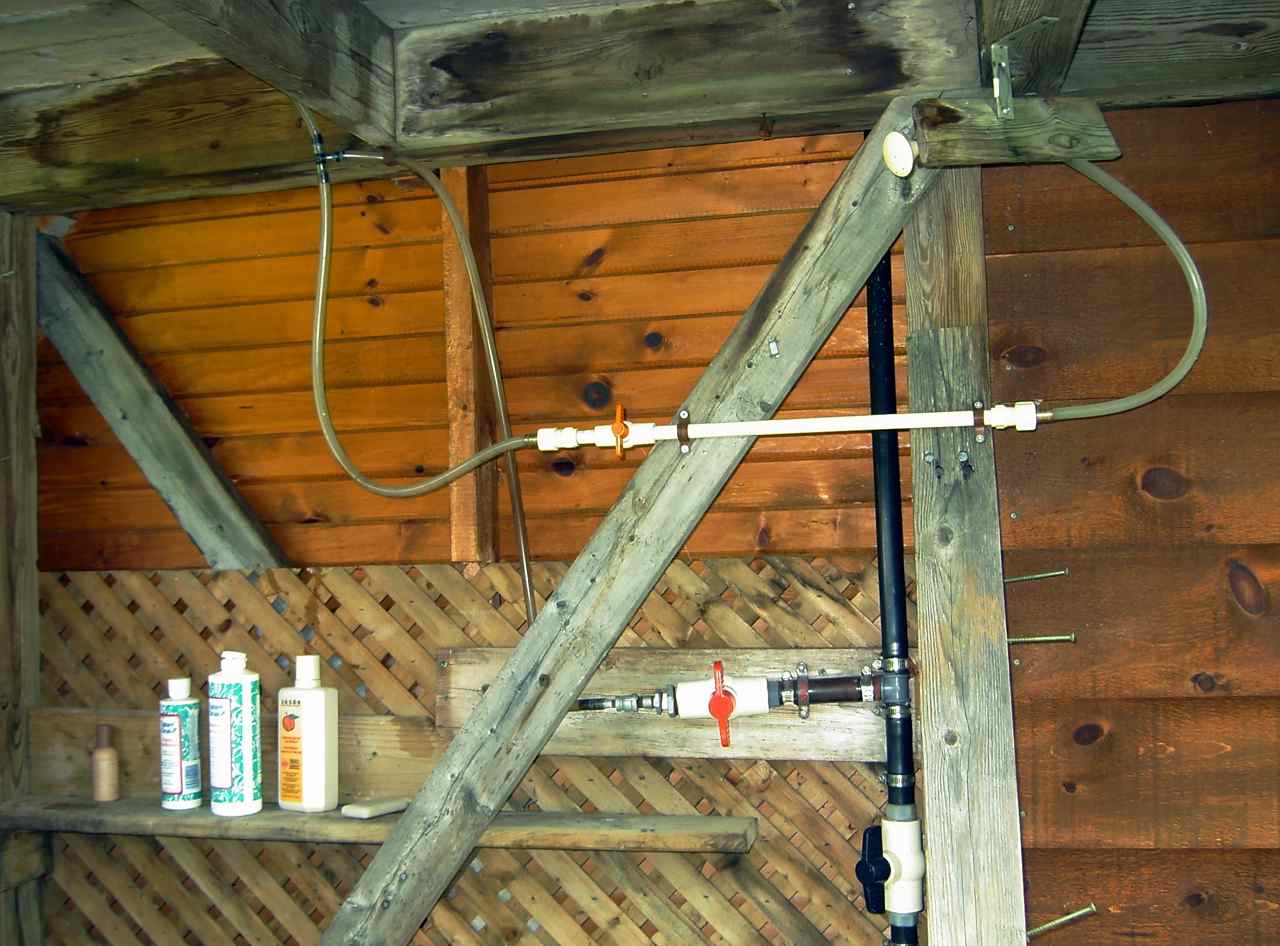 We're saving quite a lot of well water with this during the summer as well as some wear and tear on the pump, some electricity and also diverting quite a lot of water from being contaminated in the black water of the septic tank. We use mild bio-degradeable soaps and so far the local foliage seems to be enjoying the extra water.